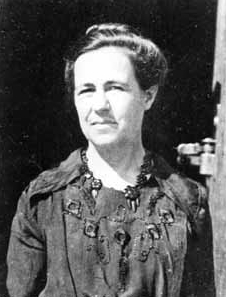 American born Antonia Maury came from a family with a distinguished scientific background. She was a cousin of Matthew Maury, the oceanographer, a niece of Henry Draper,  the physician and astronomer after whom the Harvard star catalogue was named, her sister became a paleontologist, while her father, a clergyman, was also a well-known naturalist.

Maury was educated at Vassar and graduated in 1887; two years later she became an assistant to Edward Pickering at Harvard College Observatory, as well as lecturing at various eastern colleges between 1899 and 1908. Her first assignment for Pickering was to determine the orbital period of the spectroscopic binary Zeta Ursae Majoris, also called Mizar, which was first discovered by Pickering in 1887. Maury independently discovered the second binary, Beta Aurigae and determined its orbital period.

Maury also did a lot of work on spectra, and around the same time that Cannon was revising the system of spectral classification of stars, Maury proposed an additional modification. She argued that not just the absence or presence of a particular spectral line was important, but also its appearance. Within Cannon’s system, Maury noticed that two stars having the same pattern of lines and colour were also displaying differences in line width and sharpness. She therefore introduced three further subdivisions that recognised these features. She marked stars with normal lines ‘a’, those with hazy lines ‘b’, and those that were sharp, ‘c’; intermediate cases were marked ‘ab’ or ‘ac’. This has been described as the first step in using spectroscopic criteria for the luminosities of stars. However, the system was ignored by her Harvard contemporaries as being too cumbersome, and brought her into direct conflict with Pickering, forcing her to temporarily leave the project in 1892.

Even having left the Observatory, Pickering urged her to complete her work or else hand it over to someone else. Maury demanded to be acknowledged as the author of her work, a gesture commonly denied to women scientists. After much conflict, she eventually got her way, and her catalogue of over 600 stars appeared in volume 28 of the Harvard Annals in 1897, and was the first issue to have the name of a woman on the title page.

Although Pickering continued to downplay the importance of Maury's work,  one person, Ejnar Hertzsprung was quick to see the significance of her classification system and in 1905 pointed out that c-type and ac-type stars were brighter than a- or b-type stars. Of all the catalogues published, only Maury's classification provided the distinction that he was looking for. Maury's work was vital in Hertzprung's formulation which came to be known as the Hertzprung-Russel diagram. Her contribution to spectral analysis was finally acknowledged in 1922 when the International Astronomical Union modified its official classification system based on Annie Cannon's system to include the prefix c-to a certain spectral type defined by narrow and sharp lines.

Although Maury did not return to Harvard for over a decade after the publication of her catalogue, she continued to research spectroscopic binary stars. She turned her attention to the complex spectroscopic binary, Beta Lyrae, and publishing her conclusions based on over 300 spectra of the star in a treatise in the Harvard Annals in 1933.