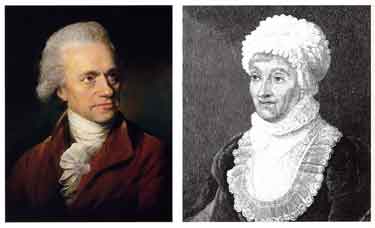 Caroline was a German-born English astronomer and the sister of astronomer Sir William Herschel, who was 12 years older. Her father, Isaac, tended gardens to support his family, and was a proficient musician, playing in the Prussian army. All six children were encouraged to train in maths, French and music, however Caroline’s mother wanted her daughter to become a house servant. Isaac gave his daughter a basic education, despite his wife’s disaproval. Typhus struck Caroline at age ten, which stunted her growth and she remained a height of four foot three.

Although Caroline never married, at age 22, a few years after her father’s death, she moved to Bath, England, where her borther had moved to become a music teacher. She became his housekeeper and he gave her singing lessons. William soon became a well established music teacher and earnt an annual salary of £400. 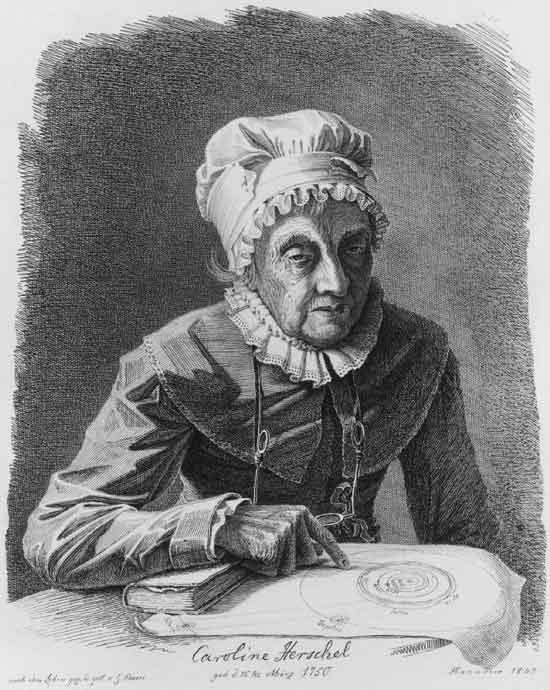 It was William who became interested in astronomy first, and pursued it as a hobby to pass time in the evening. Each evening, on return from work, he would retire to bed with milk and an astronomy book, and the following morning would give Caroline an impromptu lecture on what he had learnt the previous evening. Soon Caroline became just as interested in astronomy, and she began supporting William in his work on telescopes, while he continued to teach her alegbra, geometry and trigonometry, which became important for her future work on reducing astronomical observations. William’s interest in telescopes was driven by the desire to see deeper and deeper into space and in 1781he made the first observation of what would prove to be Uranus, and within a year he accepted the role of King’s Astronomer to George III. The job gave him plenty of time to continue his astronomical observations and during this time heperfected his telescope, building a series of ever larger instruments that ultimately ended with his famous 40 foot focal length instrument.

Caroline continued to assist her brother as a house maid, and over time she began to help William with his observations, grinding and polishing mirrors, as well as performing the calculations assosciated with the observations. At age 32 she became William’s apprentice and when William married, Caroline performed many observations alone, occupying herself using the 27-inch focal length Newtonian telescope with which she detected a number of astronomical objects. Between 1783 and 1787 she made an independent discovery of M110 (NGC 205) the second companion of the Andromeda Galaxy, and during the years 1786 - 97 she also discovered eight comets and rediscovered Comet Encke in 1795. The periodic comet 35P/Herschel-Rigollet bears her name. The following year she was granted an annual salary of £50 by George III for her work as William's assistant.

By 1797, William’s observations had highlighted a number of discrepancies in the star catalogue published by John Flamsteed, which was complicated to use because it was published as two volumes, the catalogue proper and a volume of original observations. William realised that he needed a cross-index in order to properly explore these differences, but was reluctant to devote time to it at the expense of his more interesting astronomical activities. Caroline took on this ardous task which resulted in the Catalogue of Stars, published by the Royal Society in 1798. It contained an index of every observation of every star made by Flamsteed, a list of errata, and a list of more than 560 stars that had not been included.