A German astronomer, Maria was taught by her father and uncle, who believed that she deserved the equivalent education bestowed upon boys. Her interest in astronomy was nurtured and she studied with self-taught astronomer and farmer Christopher Arnold, for whom she eventually worked. Through Arnold, Maria developed a relationship with renowned astronomer and mathematician Gottfried Kirch. Despite being 30 years her senior, they married and raised four children who all grew up to study astronomy with their parents. 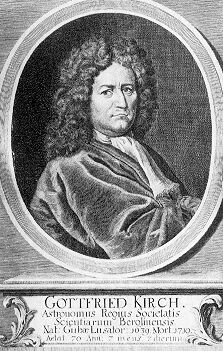 Maria and Gottfried worked together on observations and calculations, as well as weather observations, to produce calendars, ephemeredes and almanacs that were used for navigation. However, Maria was frequently seen as Gottfried’s assistant rather than an equal member of the team. But in 1702 Maria discovered her own comet (C/1702H1) and in doing so became the first woman to make such a discovery. Her husband confirmed the observation, and it is said that he exclaimed surprise to not have noticed it himself in his own observations, and although the custom is to name a comet after its discoverer, Gottfried took the credit. It is speculated by some that he may have suffered ridicule if the truth were known, but more likely is that Maria’s preference to publish her work in German would not allow her to publish the discovery in Germany’s only science journal of the time, Acta Eruditorum, which was composed in Latin. Even though Gottfried admitted the truth almost a decade later, the comet was never renamed. Maria was not deterred and continued to publish her work in astronomy in German publications. Of particular note are her observations of the Aurora Borealis in 1707, the conjunction of the Sun with Saturn and Venus in 1709, and the approaching conjunction of Jupiter and Saturn in 1712, which have become lasting contributions in astronomy.

After Gottfried’s death in 1710, Maria tried to take over in his place as astronomer and calendar maker at the Royal Academy of Sciences, but she was met with strong opposition. It was not unusual for widows to take over their husband's business, and she claimed to have been carrying out most of his work during her husband’s illness from which he died. Even the support of the Academy’s president (he had arranged for her to be presented to the royal court of Prussia in 1709 where she made a good impression as she discussed sunspots) was not enough and the council refused to let her work, even though it left her with no income. Maria petitioned but was repeatedly denied, and a man, Johann Heinrich Hoffmann, who had little experience, took the job instead. His lack of experience soon showed as he quickly fell behind, and it was suggested the Maria become his assistant.

However, she soon went to work for a family friend, Bernhard Friedrich Baron von Krosigk, who was an enthusiastic amateur astronomer. She worked in his observatory and trained her son and daughters to act as her assistants and continued the family's astronomical work of producting calendars and almanacs as well as making observations. On her friend’s death two years later in 1714, Maria worked for a professor of mathematics for a short time before returning to work on calculating calendars.

In 1716, Maria's son Christfried became the director of Berlin Observatory of the Royal Academy of Sciences, following Hoffmann's death. Maria and her daughter, Christine, became his assistants, but academy members complained that she took too prominent a role. Maria refused to take a back seat during her visits to the observatory and was subsequently forced to retire and give up her home, which was sited on the observatory's grounds. Maria continued working in private but conditions eventually forced her to abandon all astronomical work and she died in Berlin in 1720. Her three daughters continued much of her work after her death, assisting their brother in his position as master astronomer.