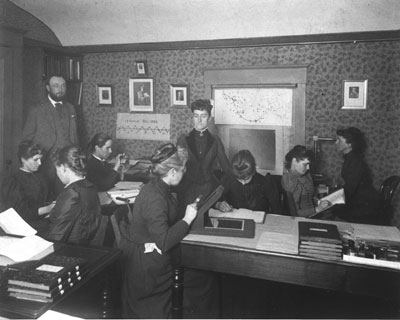 Williamina was a scottish astronomer born in 1857 in Dundee, where she also attended public schools. When she was 21 she moved to Boston with her husband, and fell pregnant. However, her husband abandoned her and she had to seek work to support herself and her new son, Edward. She became a maid in the home of Professor Edward Charles Pickering, who ran the Harvard College Observatory. He famously stated that he was frustrated with his male assistants and that his maid, Williamina, was capable of doing a better job. Thus, she was employed to do clerical work at the observatory. She soon demonstrated her flare for astronomy and devised a system to classify stars according to how much hydrogen they displayed in their spectra. She also contributed to the cataloguing of stars that would be published as the Henry Draper Catalogue, and in nine years she catalogued over 10,000 stars as well as discovering 59 gaseous nebulae, 310 variable stars and 10 novae. She also discovered the Horsehead nebula on a photographic plate taken by William Pickering.

In 1899, Williamina had proved herself to the extent that she became Curator of Astronomical Photographs at Harvard, and was placed in charge of dozens of other women hired to perform star counts and classifications. In 1906 she became the first American women to be given hononary membership to the Royal Astronomical Society of London. She was also awarded the Guadalupe Alemndaro medal by the Astronomical Society of Mexico for her discovery of new stars. She published A Photographic Study of Variable Stars  in 1907 and Spectra and Photographic Magnitudes of Stars in Standard Regions in 1911.

She died of pneumonia at the age of 54. She has the crater Fleming named jointly for her and Alexander Fleming.