'She is an Astronomer': How did you first become interested in astronomy?

Emily Baldwin: I first got interested in astronomy at age 8 when my dad took me to an open evening my school were holding in collaboration with local astronomy societies (either Farnham or Guildford, or both, I'm not sure!). We got to look through telescopes at the Moon and Jupiter and its satellites, and I remember being wowed by how fast the satellites moved across the field of view. There was also a competition to make a painting on something astronomical - I made a collage of the Sun rising over Stonehenge and I won! The prize was a signed copy of Patrick Moore's Universe for the Under Tens, and I've been hooked ever since! The book still has pride of place on my book shelf.


SIAA: What stage have you reached in your career?

EB: I found my dream university course - Planetary Science - at University College London. This incorporated everything from planetary interiors, surface processes, ocean circulation, atmosphere and climate on the Earth, to all the other planets in the Solar System, solar physics, astrophysics, space systems, astronomy, and even practical observing sessions at Mill Hill Observatory. I learnt many field geology techniques too and we got to visit amazing sites such as the Reis impact crater in Germany and Mt Etna in Sicily.

There were ten of us who started the course together - 8 girls and 2 guys. 7 girls graduated in the end, with the others leaving or switching to other courses in the first year. In other years it has been just guys or just girls, or a mix of both. I stayed on at UCL to do my PhD. Having specialised in my fourth year of undergraduate in impact cratering there was a natural progression to continue this as a PhD. In my year and in fact in every year there was a fairly even intake of male and female candidates. At conferences there was a definite male bias though, and I don't recall ever meeting a female professor in my field, but perhaps once my generation of scientists goes through the system then things will change!

I am, however, no longer in research, having been one of the few people I know who actually enjoyed writing up my thesis, I realised that my passion was in communicating science to the public and reporting on other people's research rather than doing it myself! 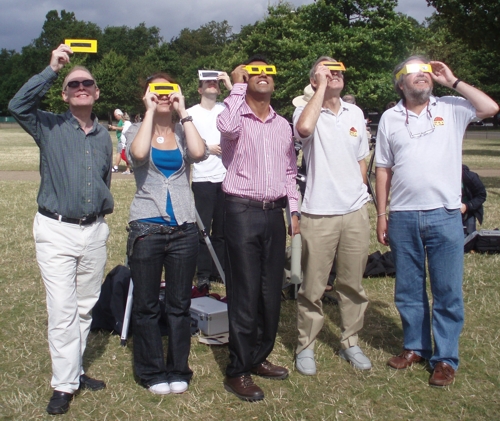 SIAA: What kind of things has that interest in science communication led you to do?

EB: Alongside my PhD (as well as managing a student bar!) I got involved with the Society for Popular Astronomy. I ended up becoming the Editor of a four page glossy supplement aimed at children called Prime Space that was distributed to science centres and with the SPA's quarterly publication Popular Astronomy. I also set up a youth section to the SPA - the Young Stargazers - for the under 16s. Also alongside my PhD I began writing short planetary science news stories for the Geological Society of London's monthly Geoscientist magazine, and it was this combined with my involvement with the SPA that lead me to become involved with the Starlight newsletter and ultimately Astronomy Now.

Starlight is an eight-page newsletter and website (www.starlight-news.co.uk) that Keith Cooper (Editor, Astronomy Now) and myself co-edit. Starlight is now an official project of the IYA and is circulated to some 30,000 school children each quarter. Because of this contact with Keith, I also began writing commissioned articles for AN, too. Conveniently, my PhD finished at around the same time that AN were looking for someone to write the news full time for their website, Astronomy Now Online, and I happened to be in the right place at the right time!


SIAA: What is your current position?

EB: My job title at Astronomy Now is Website Editor. On a day to day basis I follow up press releases describing the latest missions, science results and so on across a wide genre of space, astronomy, cosmology and planetary science. There are three full time editors based permanently in the office: Magazine Editor and Assistant Editor, (both male) and myself, and one part-time Night Sky Consultant (male), as well as one full time and one part time office manager (both female) who deal with subscriptions, product orders and so on. There are numerous other team members, both male and female, who work from home or are freelance contributors.